After New York, London and Milan, the Fashion Week that presented women’s prêt-à-porter for next autumn-winter was going to end in apotheosis in the fashion capital of the world, where it was held from February 28 to March 8. But Paris could not be a party. After two years burdened by the coronavirus, the tragedy of a war on our doorstep lent a certain sense of absurdity to the parade of people rushing to parades.

This is how the fashion world has understood it, which has done a balancing act to show its compassion in the face of this conflict without spoiling the show. Ralph Toledano, president of the Fédération de la haute couture et de la mode, set the tone, inviting “live the parades with the gravity that is essential in these dark hours”, remembering that “Creation is based on the principle of freedom, whatever the circumstances”. Many designers showed their solidarity with Ukraine, wearing yellow and blue, asking for donations on social networks. Beyond that, on the catwalks, most of the collections showed a prophetic sobriety.

Black returns as well as the non-color of the next season. Stunning at Saint Laurent, where Anthony Vaccarello ditched sexy for classic chic, his supremely elegant Parisians parading in the shadow of the Iron Lady. Also absolute in Givenchy, the threadlike silhouettes dressed in leather and satin by designer Matthew M. Williams assuming an almost punk genre. Black also predominates in Rochas, where Charles de Vilmorin declined it on different materials, from brocade to muslin, in a color chart effect. Black splashed but very present in the palette of Nicolas Ghesquière at Louis Vuitton who, as a master of the mixture of genres, showed a perfect masculine/feminine wardrobe, worn without transition during the day and at night.

Balmain and Instagram star Olivier Rousteing has also tempered his exuberance this year. From a personal accident, he drew a collection that responds strangely to the news of the war, expressing a need for protection through padded corsets, tops that look like futuristic bulletproof vests, golden shields. Military references found at Dior, where Maria Grazia Chiuri designed corsets with air pockets, reinforced shoulder pads, armor for modern women worn over lace dresses or vintage houndstooth suits. Also at Loewe, Jonathan Anderson adds padded sausages or bodices made from recycled plastic to evening gowns. Arnaud Vaillant and Sébastien Meyer (Coperni) have reinterpreted the coat, in black wool, which covers the head as if to hide from a hostile outside. At Acne Studios, Jonny Johansson even offers a dystopian universe, populated by silhouettes dressed in clothes with holes, damaged, in an aesthetic mad max.

But the highlight of this Paris fashion week will continue to be the Balenciaga fashion show. The creator of him Demna, who has always stood out for the political messages of his parades, has surpassed himself in tribute to Ukraine, he a refugee from Georgia. In a room in Le Bourget, where the words of the Ukrainian poet Oleksander Oles (1878-1944) resounded, the guests, behind some glass that kept them at a distance, remained seized in front of the models dressed in black, with leather suits. , wears floaties, XXL coats, struggling under a fake apocalyptic snowstorm.

Long relegated or even discredited as vulgar, heeled or flat, pleated or molded, thigh-high boots are proudly on display again, and designers like them high, even very high. Thus, Isabel Marant exhibits a beige leather version like an ice hockey goalie leggings, but giving it an ultra-feminine look. Vivienne Westwood’s Andréas Kronthaler offers them outrageously sexy on red vinyl, a nod to Pretty Woman. At Givenchy, we rediscover them on the contrary, in a second skin of smooth matte leather, worn like stockings. For Chanel, Virginie Viard declined them with maxi rain boots, in black, khaki or beige rubber. 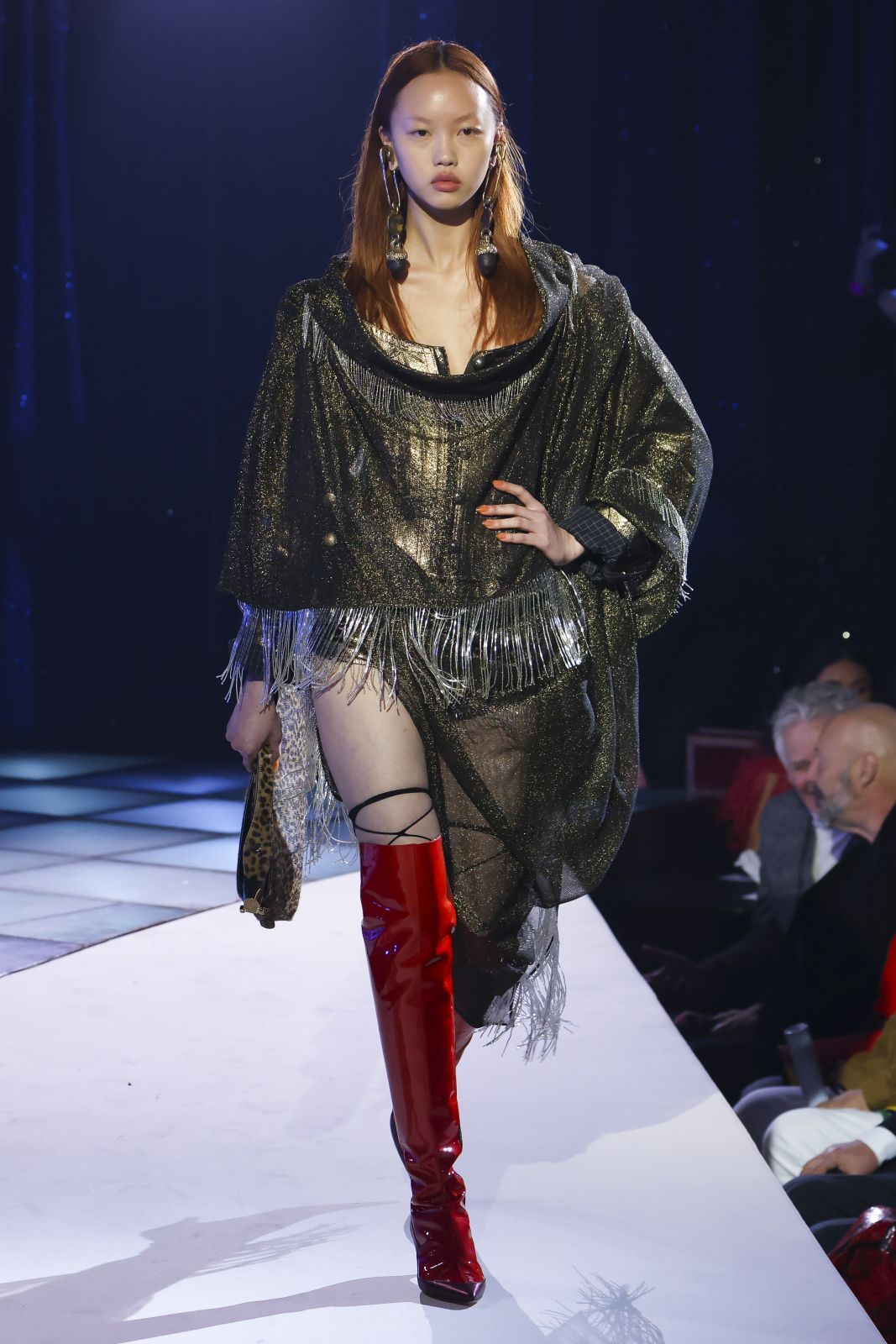 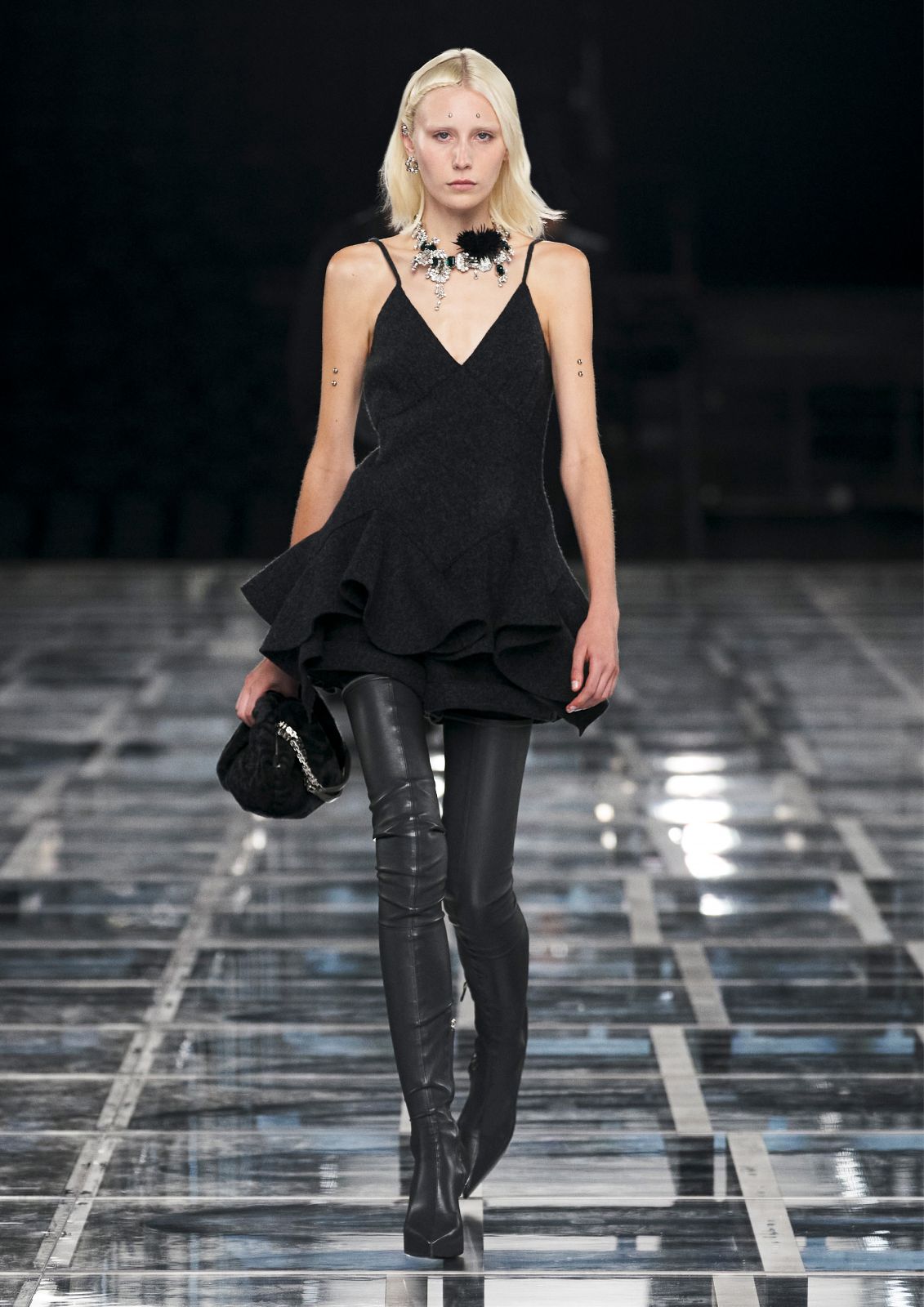 The female version of the tuxedo returns to the scene. Invented by Yves Saint Laurent in 1966, this iconic piece remains a staple of the label, featuring square shoulders and classic lapels, true to the original. But we also notice it in a disco version at Louis Vuitton with a wide-cut men’s jacket with large lapels, dotted with black sequins. In Coperni, on the other hand, it is adjusted and unstructured with open necklines at the waist, furiously sexy. And very current in Rochas, where Charles de Vilmorin uses satin and a fluid cut for an evening dress effect. 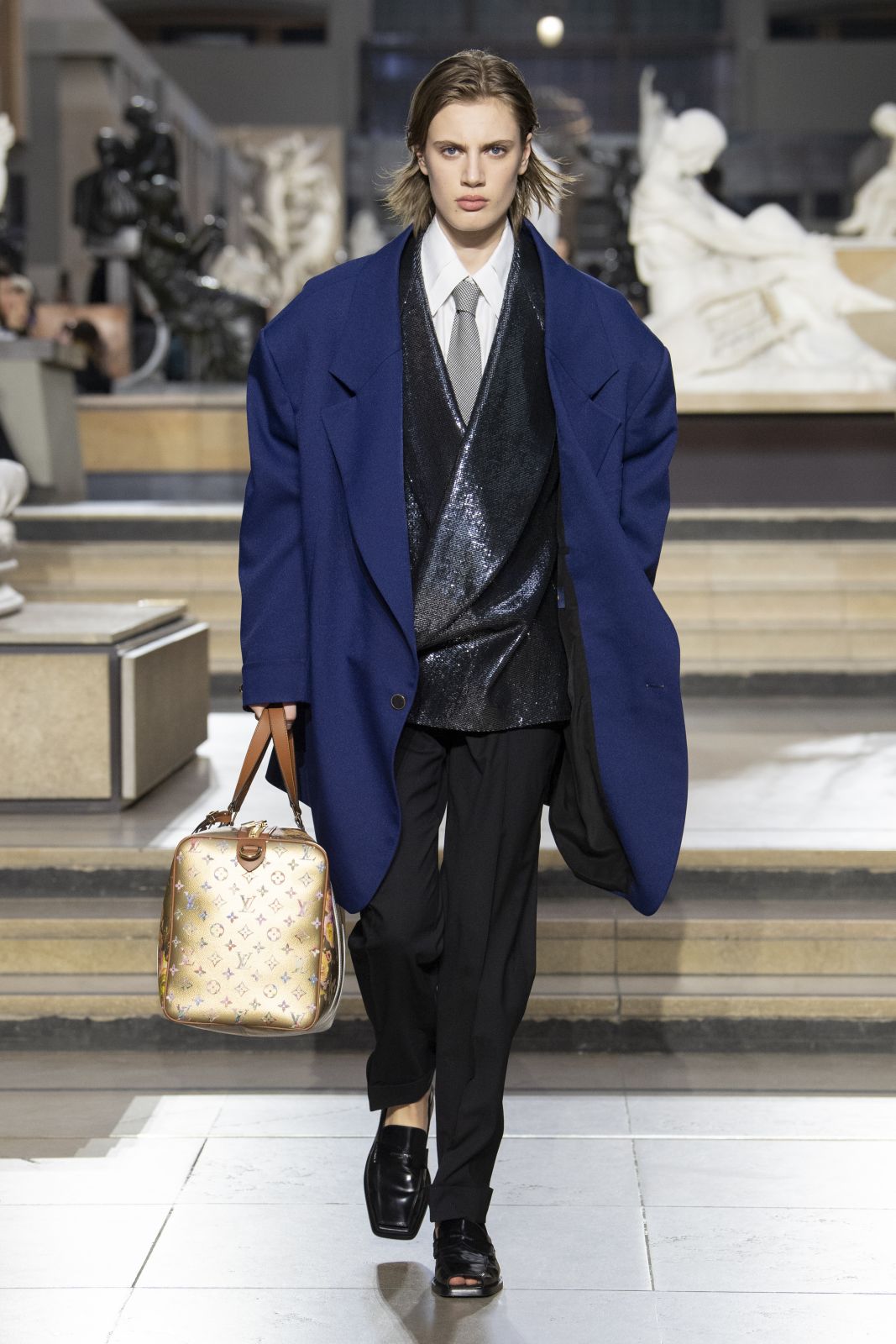 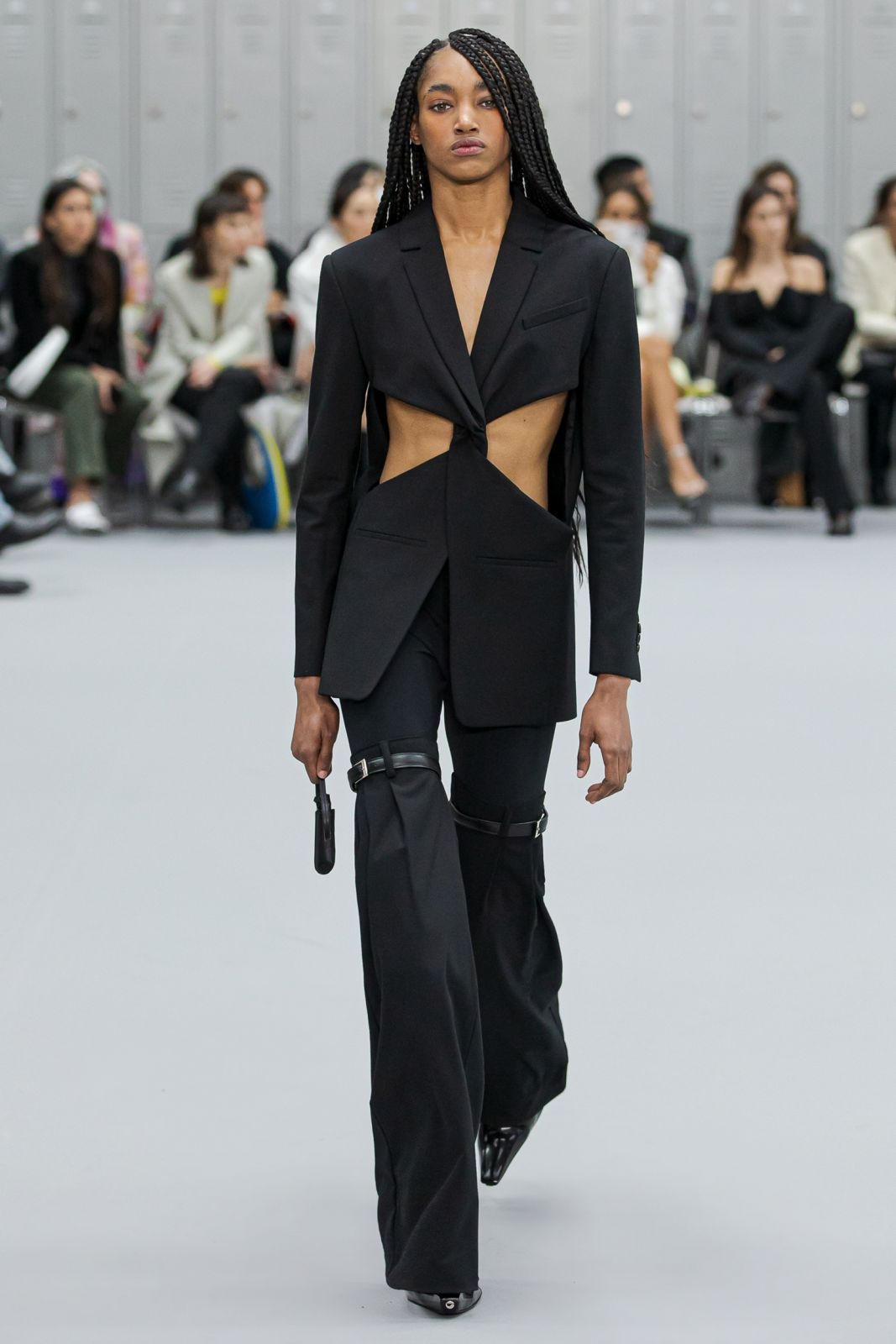 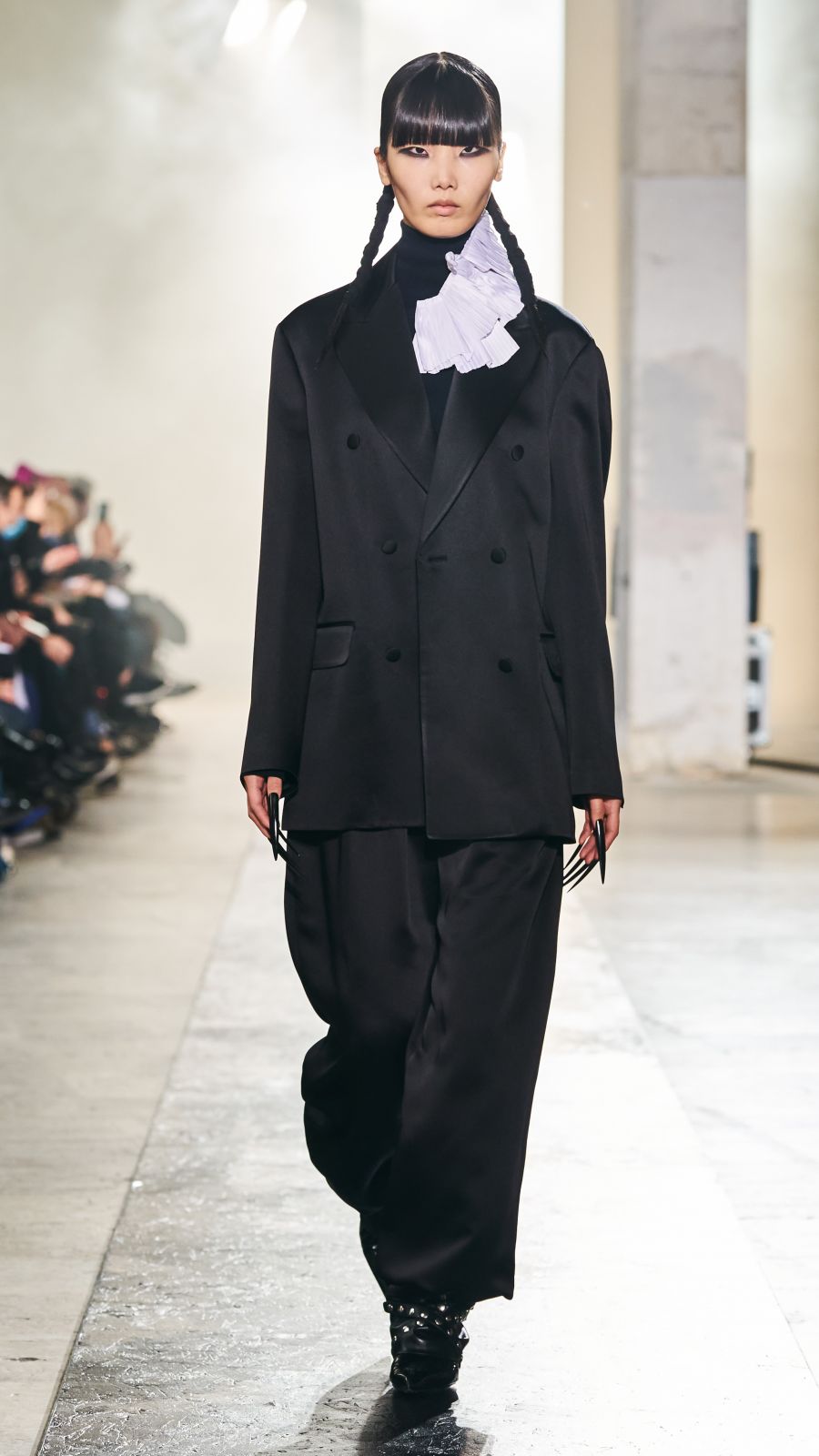 Lace, fine chiffon, fishnets, openwork patterns: the body is revealed, the skin is revealed, many designers have chosen to reveal a little… or a lot. As in Loewe where Jonathan Anderson dares with the T-shirt in total transparency, but in an iridescent recycled plastic material that distracts the eye. Sensual and vaporous, the Koché woman wanders around in a mermaid dress sewn in cornflower-colored chiffon, half-naked. Dior signs a dress with an Art Deco-inspired lace top finished off with an overlay of embroidered veil petticoats. At Coperni, the midnight blue minidresses with rhinestones let the light pass through, like a Milky Way over the body. 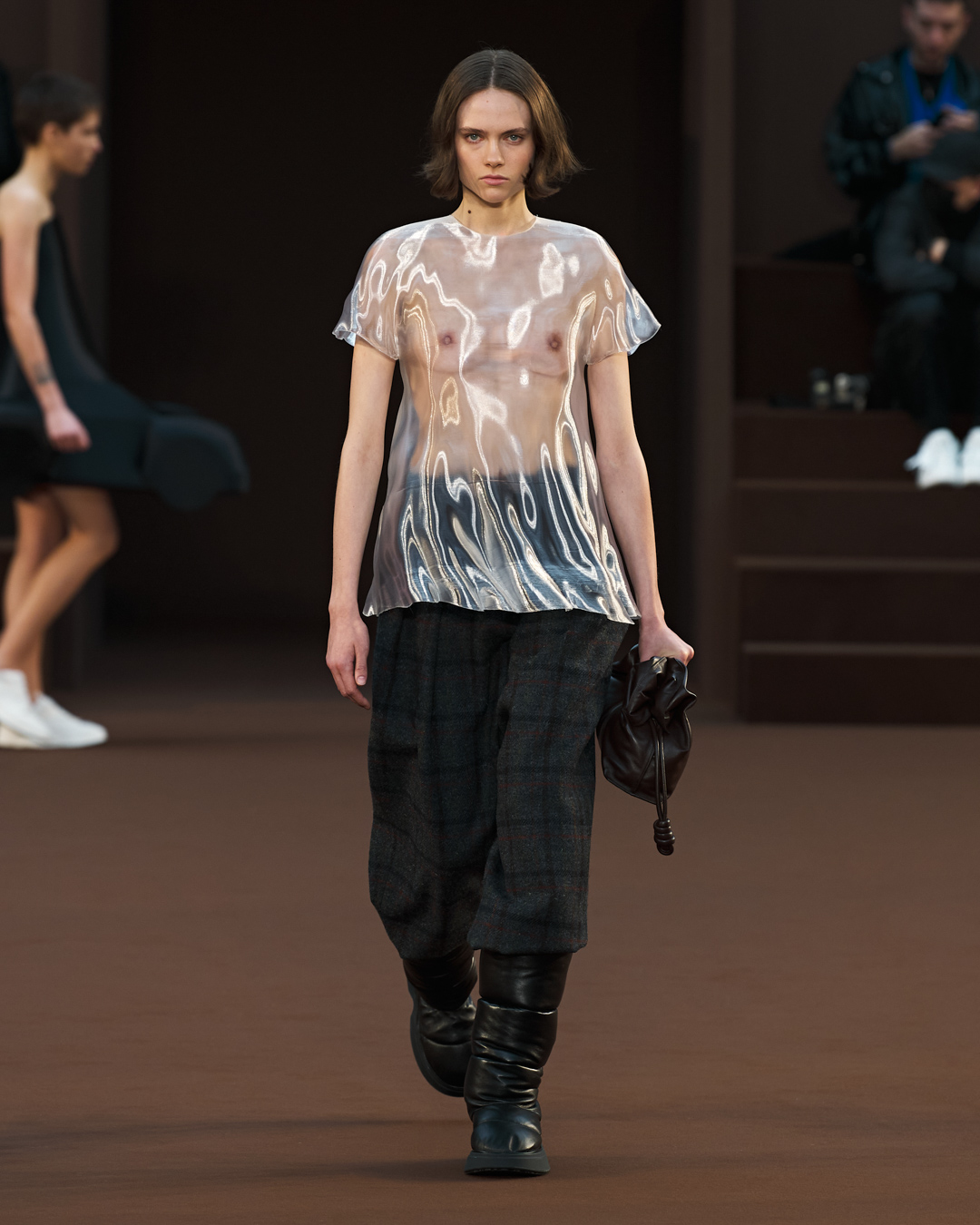 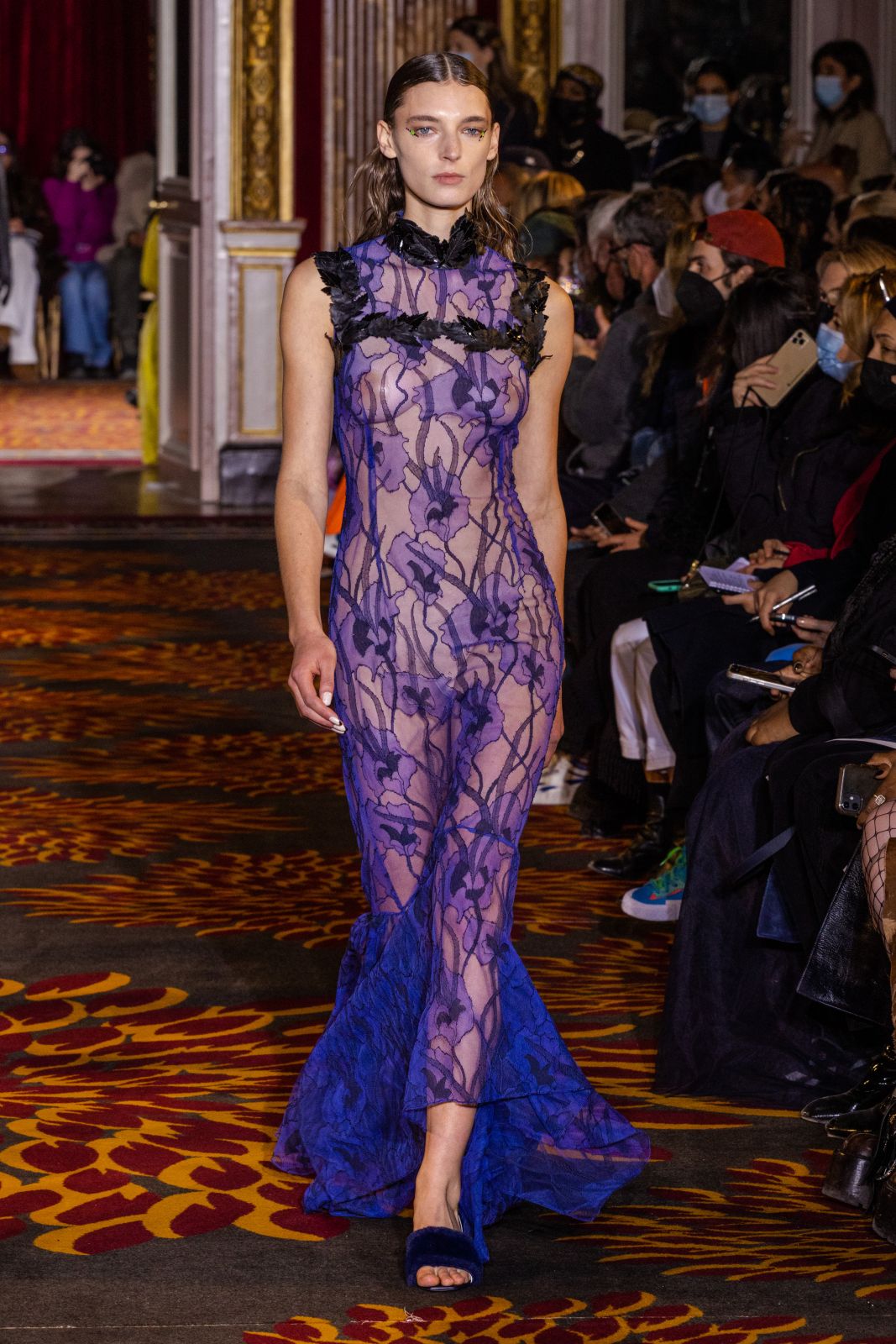 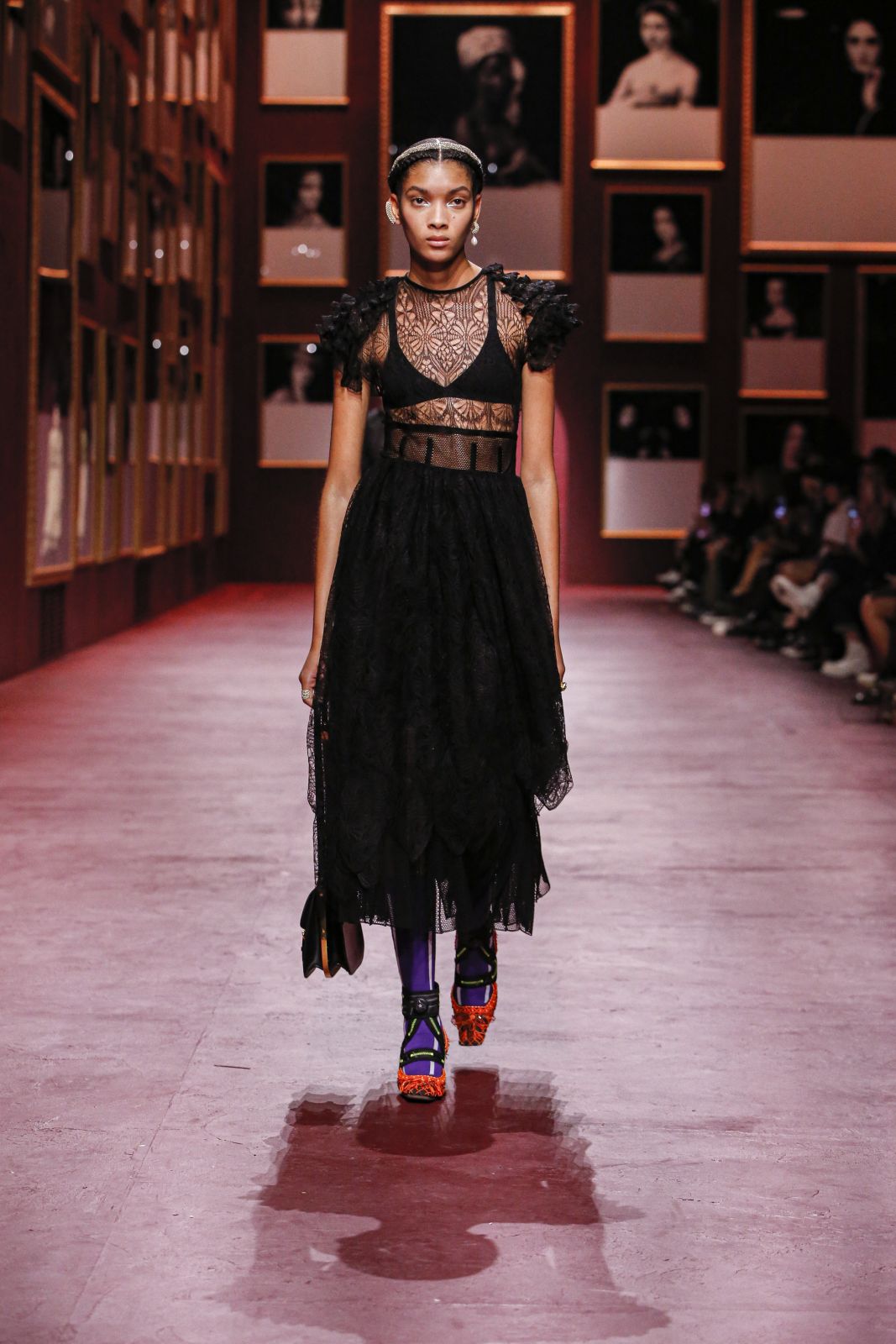